The Office of the Auditor General was established during the Italian Colony named as “Controlere Generale Di Conti”. Its functions were to control the accounts and properties of Eritrea. During the British Administration the office was named as Office of the Auditor General and its functions were controlling of Government assets, revenue and expenditures. During the Federation Era (1950 – 1962) under the auspices of UN, the powers and duties of the office were defined by law (Regulation No. 137/1957). It was performing audits of accounts and properties and reporting the results to the then parliament.

The ex – Northern Regional Office of the Auditor General was dissolved after Eritrea was liberated from Ethiopia and a new Office of the Auditor General (OAG), that become the Supreme Audit Institution in Eritrea, was first established by Proclamation No. 23/1992 in May 1992 which was later repealed and replaced by Proclamation No. 37/1993. The mandate of the OAG was spelled out in Legal Notice 14/1993 Article 2/25 which is to audit or cause to be audited all Government institutions and parastatals and State owned enterprises. Parastatals and State owned enterprises are being audited by the Audit Service Corporation (ASC) which provides its professional audit services on fee basis and works autonomously under the general supervisory control of the Auditor General. At present the audit clients served by the OAG are 177.

The OAG started to give its services to the Government with a small number of audit staff. In 1992 the number of audit staff was about 20. The number of audit staff has been growing gradually until the conflict with Ethiopia started in 1998. The OAG has been facing a significant staff shortfall since the conflict started. However, the audit coverage and the quality of service have shown growth and improvement from year to year. This improvement has being achieved as a result of the efforts performed by the OAG to develop the knowledge and skills of the existing auditors in accounting and auditing. To have audit staff with the required knowledge and skills, the office has given priority, among others, Human Resource Development Program. To make the program for Human Resource Development realistic, the Office of the Auditor General has worked closely with AFROSAI-E and other governmental and international organizations. The office has given its staff varying opportunities that help them to develop their knowledge and skills in Accounting and Auditing. To mention some, enrolling in ACCA, MSc in Audit Management and Consultancy and participating at workshops on Regularity Audit, Financial Audit, Compliance Audit, Performance Audit, Quality Assurance Reviews, Management Development Program (MDP), SAI Performance Measurement Framework (SAI PMF), etc. delivered by AFROSAI-E. Currently, the OAG has 17 permanent, 80 National Service, 2 Contractual, in total 99 employees. Out of the total 66 are audit staff and the remaining 33 employees are members of administrative staff and IT staff.

The OAG has classified its audit clients into three groups namely, big, medium and small audit entities based on the size of their budget and nature of their activities. The OAG’s standard practice is to audit the audit clients with big accounts annually and audit clients with medium and small accounts on a rotation basis once every two and three years respectively. However, the existing no war no peace situation with Ethiopia has affected the activities of the country including the activities of the OAG. Due to shortage of skilled manpower, the available audit clients could not be audited annually. As a result the OAG has a great number of audit backlogs. To minimize the audit backlogs, the OAG has decided as a policy and priority to audit only the most recent two years of each budgetary unit and make a general review of the more distant years that have not been audited, unless it believes there is a need for full audit. This policy has been implemented since 2002. 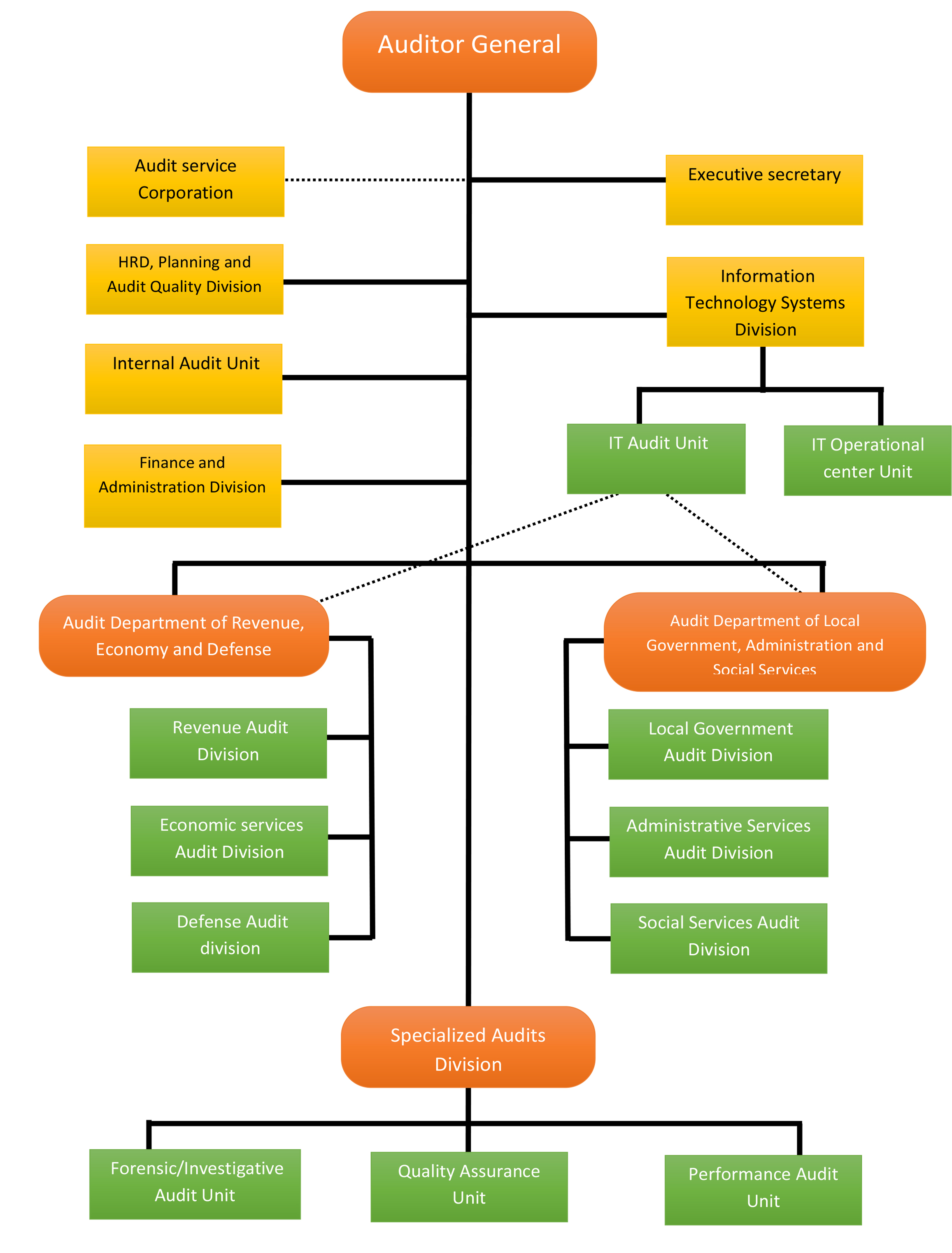